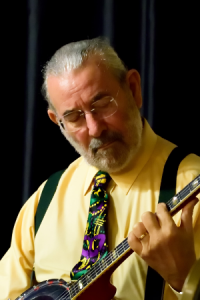 In addition to his Banjo and Blues Guitar playing Louis is in demand as a Jazz historian, lecturer and reviewer. Moving from the North West to London in 1958, he was a semi-pro musician with Mac’s New Orleans Band, the Dave Bailey Trio and Barry Palser’s Savoy Jazzmen. He also played and recorded with the Ken Colyer All-Star touring band in the 1970s and ‘80s

Louis became a full-time musician in 1988, having formed Louis Lince’s New Orleans Ban He was player/manager with Annie Hawkins’ New Orleans legacy band from its inception in 1993, leaving in 1997 to become a member of Monty Sunshine’s Band until Monty’s retirement in 2000.

Louis relocated back to the North West in 2002 and played with Martin Bennett’s Old Green River Band before joining the Savannah Jazz Band, which he left in 2012. He is a regular visitor to New Orleans and is well-known there. He is also to be heard on many recordings with New Orleans musicians.